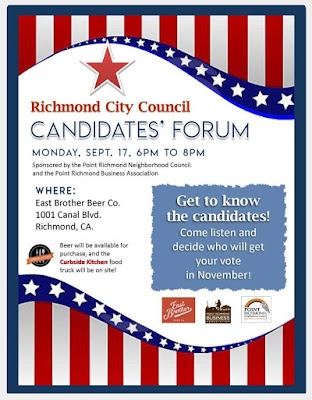 RICHMOND - The East Brother Beer Company at 1001 Canal Boulevard will host a candidates' forum tonight for those seeking election to Richmond City Council in the November election.
The East Brother event runs from 6-8 p.m. and is open to the public.
A spokesman for the company said last week that nine of the 13 candidates running for three council seats have said they will attend.
The Curbside Kitchen food truck will be selling food. Beer will be available in the company's tap room where the event will take place.
The event is co-sponsored by the Point Richmond Neighborhood Council and the Point Richmond Business Association.
Those groups have solicited questions for the candidates from members of the public that will be asked during a presentation.
The candidates for city council include:
Nat Bates
Diego Garcia
Carole Johnson
Demnlus Johnson
Eduardo Martinez
Vinay Pimple
Virginia Ramirez
Ada Recinos
Keith Rivers
Jim Rogers
David Schoenthal
Eleanor Thompson
Cesar Zepeda
The candidates for Richmond Mayor are Tom Butt and Melvin Willis.