RICHMOND - The Richmond Design Review Board has reset its until Feb. 14 its deliberations on the 316-unit Terminal One project proposed for a 14-acre bayside site on Dornan Drive.
The Terminal One project had been scheduled to come up for DRB discussion Jan. 24.
The DRB at its Dec. 13 meeting had two-hours of back-and-forth dialog about a variety of issues, most centered around discrepancies between colors on drawings provided by Terminal One to the DRB and samples of building materials.
"The renderings and labelings are out of sync," DRB member Michael Hannah said at that meeting. "This is causing more confusion than necessary."
The design presented at that meeting for Shoreline Drive indicates there will be no public parking across the street from the single family homes, the site of a proposed public park and public pier. (See photo below.)
DRB members also questioned Terminal One developers and their architect about the durability of various products, including proposed paint as well as exterior lights.
Prior to the DRB December hearing several area residents offered comments about the project's design.
Brian Lewis of Brickyard Cove told board members area residents had met Nov. 4 at the Richmond Yacht Club to outline concerns about Terminal One, including the need for more environmental cleanup as well as the lack of public parking on Shoreline Drive.

LINK: Terminal One meeting at RYC. 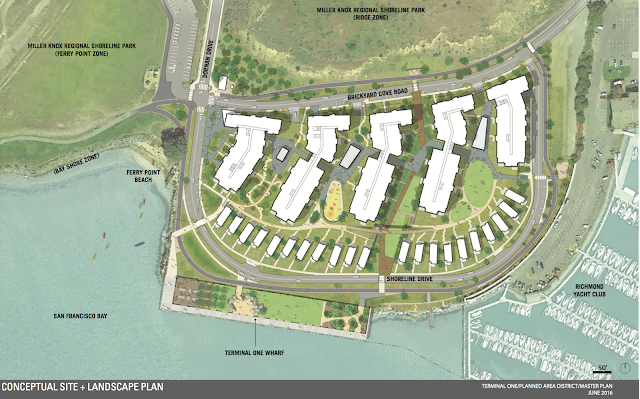 Posted by Michael J. Fitzgerald at 10:35 AM No comments: