RICHMOND - Differences of opinion by city council candidates over the success - or failure - of the City of Richmond's rent control law drew plenty of applause and audience comments at Monday night's candidates' forum at East Brother Beer Company.
Approximately 75 people attended the forum, sponsored by the Point Richmond Business Association and the Point Richmond Neighborhood Council.
A series of questions were posed to the 10 council candidates who attended, including one early on about whether Richmond's rents control law was effective, needed to be repealed, or should be amended.
And if amended, exactly how.
Candidates who said they thought the law needed to be repealed drew the loudest applause from the audience, though supporters among the candidates stood their ground in support of the voter-approved rent control measure.
Most of the candidates indicated that whether the city has a rent control law or not, the shortage of housing in Richmond is a serious problem.
The 10 candidates who participated in the forum were:
Vinay Pimple
Demnlus Johnson
Virginia Ramirez
Nat Bates
Ada Recinos
Eduardo Martinez
David Schoenthal
Jim Rogers
Cesar Zepeda
Eleanor Thompson 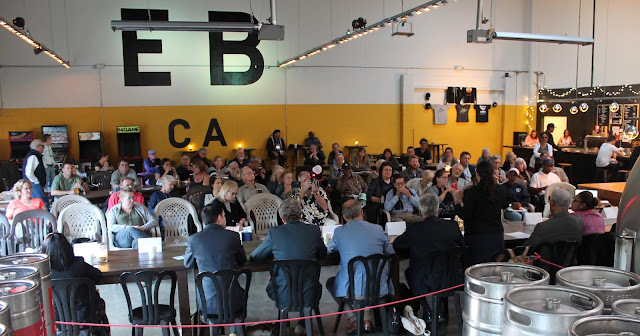 Posted by Michael J. Fitzgerald at 8:32 AM No comments: