POINT RICHMOND - Bay Area Rapid Transit Police Chief Carlos Rojas - hired this spring after working as chief of police in Santa Ana for the past five years - told members of the Point Richmond Neighborhood Council Wednesday night the major challenge facing BART law enforcement is a lack of officers.
"Ideally, I would like someone at every station," Rojas said.
The chief gave a short presentation about the manifold challenges faced by BART police as well as plans to hire more officers.
"This jurisdiction is very challenging. We police a microcosm of every city in each station and parking area."

Rojas' department is currently responsible for 107 miles of rail, stations and parking lots.
Earlier this spring Rojas announced a program to add 39 officers within 18 months. That program included a $10,000 hiring bonus.  He said he needs a "shortened timeline" to get qualified officers hired and working on the force.
The chief also addressed the ongoing problem of fare evasion, drawing a few laughs from the audience when he described police sometimes having to get between overzealous station agents and people jumping over the turnstiles.

Several audience members described occasionally feeling unsafe when traversing BART parking lots and/or stations.
Rojas said that anyone with a smartphone should download the app called BART Watch which allows users to send a message directly to BART Police about any suspicious or dangerous activity.
He said the app has already assisted BART police in apprehension of suspects.
The BART Police Chief can be contacted 510-464-7022. Or by email at: BART Police Chief.

The PRNC also heard a report from the MTA and BATA about opening a third eastbound lane in December on the Richmond-San Rafael bridge. For the full story, click HERE.
Posted by Michael J. Fitzgerald at 8:51 AM No comments:

POINT RICHMOND - A third eastbound lane on the Richmond-San Rafael Bridge - part of an ongoing construction project of the Bay Area Toll Authority and the Metropolitan Transportation Authority - will likely be in operation in December, BATA's Chris Lillie told the Point Richmond Neighborhood Council Wednesday night. 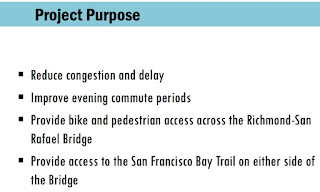 In a brief, 15-minute presentation, Lillie explained that the third lane is designed to alleviate congestion during peak hours but will not be open around the clock.
"There are no precise hours yet for when all three lanes will be open," he said.
But BATA and Caltrans will be monitoring to ensure maximum use to keep traffic flowing. Signals on the bridge will indicate when the third lane is open or closed.

On the upper, westbound deck of the bridge, BATA is working on construction of a third lane, but one that will be for bicycles and pedestrians, not vehicles. It is part of a larger bicycle/trail project.
Several members of the audience questioned why BATA isn't opening the third traffic lane westbound right now to handle the increasingly heavy morning motor vehicle traffic.
Lille said a major reason is need for changes in highway infrastructure on the Marin County side of the bridge. For the present, adding a third motor-vehicle lane to the westbound deck of the bridge is not part of the four-year pilot project, he said.
The bicycle pedestrian lane will be cordoned off with a moveable barrier. Caltrans may also use it for maintenance and possibly for emergency vehicles to respond to westbound accidents on the bridge. 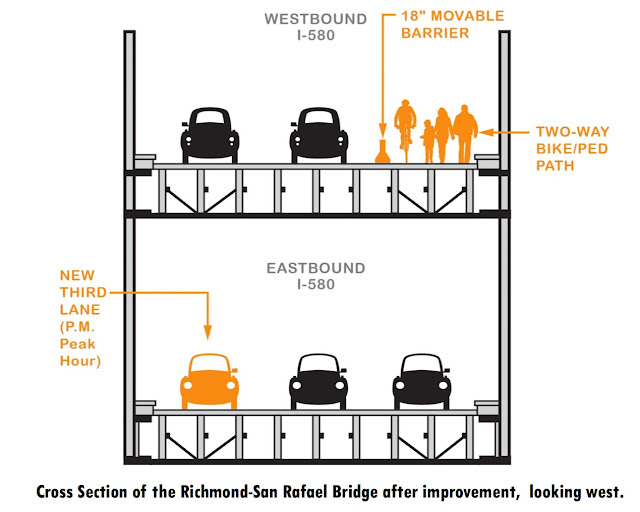 Posted by Michael J. Fitzgerald at 8:11 AM No comments: