POINT RICHMOND - Even as Republic Services was reporting Saturday that it was done cleaning up the compost-gone-sour at its Parr Road facility, Point Richmond residents were filing complaints of odors wafting over the village and out into the Brickyard Landing area.

Saturday afternoon, Sunday and again this morning - Point residents have been reporting they were smelling an all-too-familiar odor that has plagued the area on and off since September. Longtime Point residents say it's actually been an on-again, off-again problem for several years. 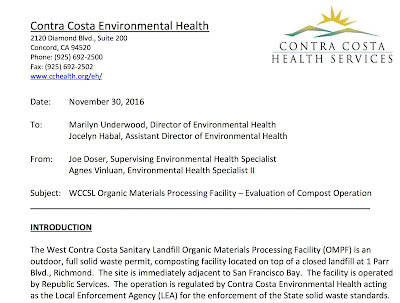 A Republic Services representative said this morning that while the original pile of composting material - believed to be the cause of the bad odor  - had been completely removed by 1:30 p.m. Saturday, it may take until Dec. 30 to haul the balance of other composting material still on the site to another location.

That material - which is not considered 'sour' by Republic - had been scheduled for normal composting. But Republic opted to truck it out rather than chance any further odor incidents, the spokesman said. This morning the trucks began hauling off that material.

This weekend and today's incidents of malodorous odors come after two back-to-back meetings about the problem earlier this month.

In the first, held Tuesday. Dec. 6 at Kaleidoscope Coffee, Republic representatives made a presentation about a new, more efficient composting system the company will start using which it believes will result in virtually no odors.

The following night at the Point Richmond Neighborhood Council meeting, Joe Doser, a supervising environmental health specialist with Contra Costa County gave the PRNC copies of a detailed 13-page report about county actions relative to Republic. The report talks about fires at the Republic facility, air pollution issues, citizen complaints and a history of the most recent odor problems.

At that meeting Doser said in July the county discovered that Republic had amassed more than 360,000 cubic yards of composting material on site - more than 10 times the company's permitted volume of 32,000 cubic yards.

The Contra Costa County report was also circulated over the weekend via the website Nextdoor by a Point Richmond resident.

Posted by Michael J. Fitzgerald at 10:56 AM No comments: