POINT RICHMOND - A special two-hour meeting - specifically to discuss parking and traffic issues in Point Richmond - will be held Tuesday, April 10 from 6:30 p.m. to 8:30 p.m. in the Point Richmond Community Center on Washington Avenue.
"The meeting is just to talk about parking and traffic," Denée Evans of Richmond Transportation Services said. "Prior meetings have been too short."
Evans made her comments during a presentation at the Point Richmond Business Association luncheon Thursday at the Hotel Mac.
Her appearance had been scheduled to discuss a wide range of parking matters relative to the Point and also to explain the mysterious appearance - and quick disappearance - of four parking kiosks installed on Park Place several weeks ago.
The kiosks were part of a planned paid parking pilot program that had been under discussion for months at both the PRBA and the Point Richmond Neighborhood Council.
But Evans said that particular idea has been taken off the table.
"There will be no paid pilot," she said.
The sudden installation of the kiosks was the result of what Evans called a "perfect storm" of miscommunications - as well as "liberties" taken by the vendor, a company called Parkeon.
"That will never happen again on my watch," she said.
Evans also lined out some ideas being considered by the city - all of which will be up for discussion at the April 10 community meeting. One is to standardize the parking stall sizes on Park Place, Washington Avenue and Richmond Avenue. The slots now are different sizes - some as large as 24 feet.
Another is to strategize how to deal with the anticipated big influx of vehicles - and people - as various approved residential developments are completed in the next few years.
Outgoing PRNC President David Schoenthal is helping organize the April 10 meeting. He said there will be a professional facilitator helping run the meeting.

Posted by Michael J. Fitzgerald at 2:39 PM No comments:

POINT RICHMOND - The Point Richmond Neighborhood Council is set to hear from three people about homelessness Wednesday - a report from city crime prevention officer Michelle Milam,  at 7:40 p.m., Richmond Police Officer Vincent Martinez at 8 p.m. and Daniel Barth, a homeless community advocate at 8:30 p.m.
The PRNC meeting begins at 7:30 p.m. at the Point Richmond Community Center on Washington Avenue and is open to the public.
"The Richmond Homeless Task force ... has been working diligently and tirelessly to figure out action-oriented solutions to homeless in Richmond that can be implemented now," Outgoing PRNC President David Schoenthal said in his agenda comments.
Milam will be talking about the city's Homeless Task Force.
Martinez will speak about working with homeless encampments.

The PRNC was also supposed to hear a report about the four parking kiosks that suddenly appeared on Park Place in the downtown business district several weeks ago. The kiosks were removed only days later after a flood of citizen questions and complaints.
That report was canceled last week.
However, Denée Evans of Richmond Transportation Services is expected to attend the Point Richmond Business Association meeting Thursday at noon at the Hotel Mac to update attendees on city plans for a paid parking pilot program that - if implemented - will include use of kiosks.
(To read a commentary on parking in the point, see: The elephant in the parking space.)
Posted by Michael J. Fitzgerald at 5:01 PM No comments:

POINT RICHMOND - The parking kiosks installed on Park Place late last Thursday are slated to be removed today.
As of 1:30 p.m., one had been removed from in front of The Farm House.
Richmond Mayor Tom Butt reported (via Nextdoor) that he had been informed by Lori Reese-Brown of the city manager's office today that the kiosks would all be pulled out.
"The parking meters for the Residential Paid Parking Permit Pilot have been removed and the Pilot placed on hold for the Point Richmond Neighborhood pending additional community outreach to discuss strategies to reduce parking impacts," Reese-Brown wrote to the mayor.
"I have conferred with numerous Point Richmond residents and we will convene meetings in April 2018 to resolve the issues around parking."
The four kiosks were installed as part of a paid parking experiment that had been discussed on and off since last fall at both the Point Richmond Neighborhood Council and the Point Richmond Business Association.
The experiment was to be limited to Park Place for 90 days.
But within hours of the kiosks' installation, resident complaints began piling up about a lack of notice that the machines would be installed along with a wave of criticism about paid parking in general in The Point.
Later this month Denée Evans of Richmond Transportation Services will be attending both the PRNC and PRBA meetings and is expected to discuss how the city will proceed with the parking issue.
She is scheduled to speak at the Wednesday, March 28 PRNC meeting at 7:30 p.m. at the Pt. Richmond Community Center. The following day she will be speaking at the PRBA at noon at the Hotel Mac.
Links to previous kiosk stories published on the Point: PRNC President and Parking Kiosks installed

Posted by Michael J. Fitzgerald at 2:06 PM No comments:

POINT RICHMOND - The outgoing president of the Point Richmond Neighborhood Council proposed Monday that the parking kiosks installed on Park Place late Thursday should be removed.
In a posting on Nextdoor, David Schoenthal offered a six-point "road map" for calming residents who have nearly unanimously reacted negatively to the parking machines.
His first bullet point says,"Have Parkeon immediately remove the kiosks."
The newly installed parking kiosks touched off a lengthy (and continuing) set of comments and responses on the social media site. Most of the commenters take issue with the unannounced installation of the machines as well as the idea of paid parking at all on Park Place, Washington Avenue and Richmond Avenue.
The kiosks were installed only on Park Place as the first step in a paid-parking pilot project that has been the subject of discussions at both the PRNC and the Point Richmond Business Association since last fall. (See Point Richmond paid parking pilot - Oct. 27 2017)
Although the kiosks are in place, they are not dispensing actual parking permits yet.
The kiosks were installed by the Parkeon Company, a multi-national corporation that provides similar equipment worldwide for off and on-street parking as well as transit stops.
Neither the PRNC or the PRBA formally endorsed the kiosks, though they have been mentioned by city staff at various public meetings as being part of a paid parking experiment. The installation came as a surprise to a number of city officials, including Richmond Mayor Tom Butt - a resident of Point Richmond.
Schoenthal's other five road map points were:

• Convene a new neighborhood colloborative solutions workshops focused on parking
• Generate ideas
• Recommend ideas to Planning Commission/City Council
• If there are pilots/studies to be done, collect data
• Come back and agree what should be done
"There was a mistake done, let's learn from it," Schoenthal said.

Deneé Evans of Richmond Parking Services is scheduled to speak at the PRNC meeting Wednesday, March 28 at 7:30 p.m. at the Pt. Richmond Community Center. She will also be speaking at the Point Richmond Business Association the following day at noon at the Hotel Mac.

POINT RICHMOND - Parking kiosks were installed late Thursday afternoon and evening along Park Place in Point Richmond, the first step in a planned 90-day paid-parking experiment for the Point. 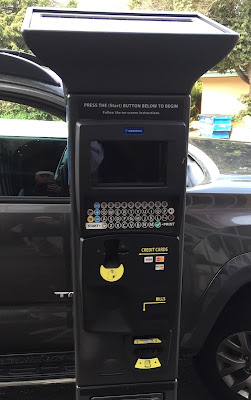 But the official-looking parking devices arrived without any announcement or explanation from the City of Richmond about when enforcement - and the requirement to pay-to-park - would go into effect.
The lack of information lit up the Nextdoor website, even drawing comments from Richmond Mayor Tom Butt.
"This was a total surprise to me," the mayor wrote. "It turns out the City Council passed this on both first and second readings on the Consent Calendar on 4/4/2017."

The kiosks were installed by a private vendor called PARKEON, a multi-national company that provides similar kiosks worldwide for transit stops, on-street parking, and for off-street vehicle parking areas.
But Mayor Butt indicated that the city doesn't have a formal relationship with the company.
"There is no record of a City contract with the vendor Parkeon," he wrote. "I am looking into it."

The sudden appearance of the parking kiosks prompted some motorists to attempt to purchase a parking permit. Different machines reportedly gave different dates in the next few weeks for when paid parking would start.
But Point Richmond Neighborhood Council President David Schoenthal said the kiosks are expected to be put into service March 19.
"The parking fees will be very low during the 90-day trial and there will be enforcement," he said. 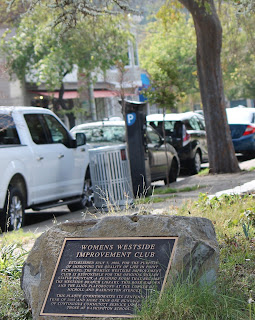 The kiosks and paid parking have been an on-again, off-again discussion topic of both the PRNC and the Point Richmond Business Association since last year.
A story in The Point in late October detailed out the City of Richmond's plan for the pilot parking project, with an explanation by Deneé Evans of Richmond Transportation Services.
"If the pilot goes as expected, additional pay stations may be installed throughout the Point Richmond Business triangle," she said. The triangle streets that would be subject to paid parking would include Park Place, Washington Avenue and Richmond Avenue. 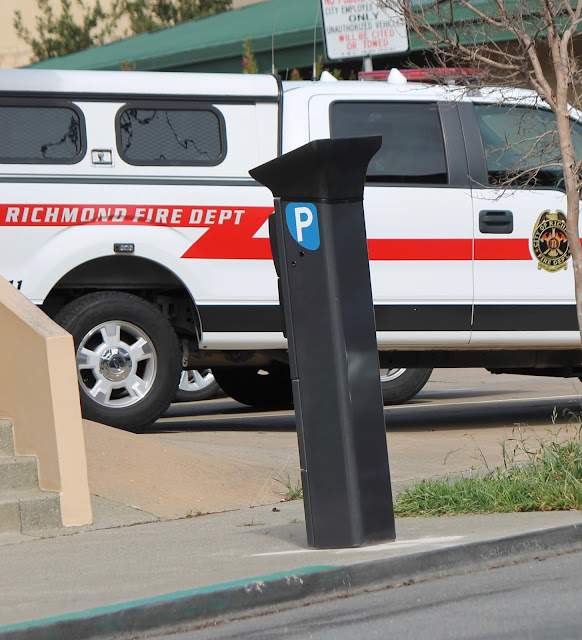 Posted by Michael J. Fitzgerald at 10:09 AM No comments: