POINT RICHMOND - A fire at a vehicle wrecking yard broke out about 7 a.m. grabbing plenty of attention from Bay Area media as well as reports from local residents about the huge cloud of smoke, visible for miles.

Fire officials reported that about 40 vehicles were involved in the blaze at Deal Auto Wrecking on West Gertrude. 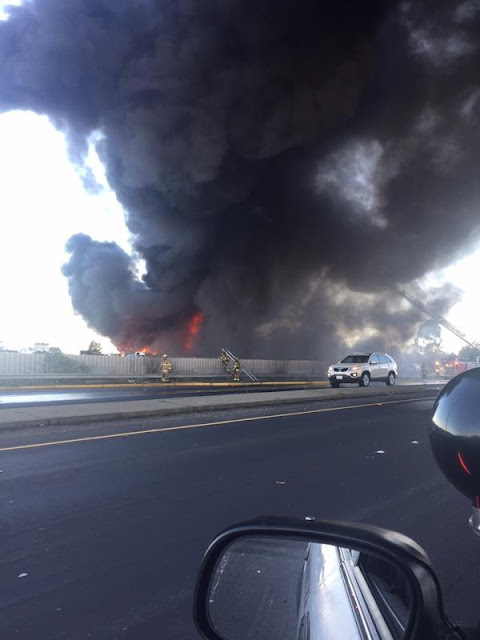 For about two hours, officials had a "shelter in place" order in effect, which essentially tells people to stay put - and indoors - for their safety.

They were concerned about the health of people breathing whatever substances were being carried in the foul black plume.

Richmond Parkway was shut down completely between West Gertrude and Pittsburg Avenues.

Shortly after the fire broke out, a representative of Republic Services - the Richmond disposal company - contacted The Point to say that the blaze was not at the transfer station or its composting operation.

The composting operation has been the center of residents' complaints and blamed for a foul odor that has wafted over the area on numerous occasions since early fall.

Here's a link to the East Bay Times story, which is being updated as the fire and cleanup progress: WRECKING YARD FIRE.

Posted by Michael J. Fitzgerald at 12:16 PM No comments: