POINT RICHMOND - A controversial plan to run Burlington Northern Santa Fe trains on formerly abandoned tracks along the shoreline in Miller-Knox Regional Park has been derailed by a court ruling, the Point Richmond Neighborhood Council was told Wednesday night.
"We beat the railroad," Point resident Eric Zell said in a brief presentation to about 30 PRNC members and the public. (In late February, the PRNC voted to oppose BNSF's plans.)
Zell has been working with the East Bay Regional Park District to fight BNSF's plans since earlier this year.
According to Zell, the judge in the case ruled that the railroad has no rights to reactivate the tracks. And the terms of a previously signed agreement between the Texas-based railroad and EBRPD precludes the company from claiming that federal law would allow them to do so.
Zell said the judge hasn't signed his ruling, pending a request from BNSF to now settle with the district over the issue. The settlement, he said, might be to avoid setting some legal precedent about federal vs. state law.
Regardless, the park district might be in a position to get the railroad to agree to do some improvements along the abandoned rails as part of a settlement.
Zell also announced that Dec. 14 from noon to 3 p.m. - rain or shine - the district is hosting an open-to-the-public celebration at the park to thank the public for its help in fighting BNSF's plan.
The party is being called "A Celebration of Public Advocacy Protecting the Richmond Shoreline at Miller-Knox Regional Park."
The celebration will also honor retiring EBRPD Director Whitney Dotson who represents the area.
For more information about the celebration, email Monique Salas or call her at 510-544-2008. 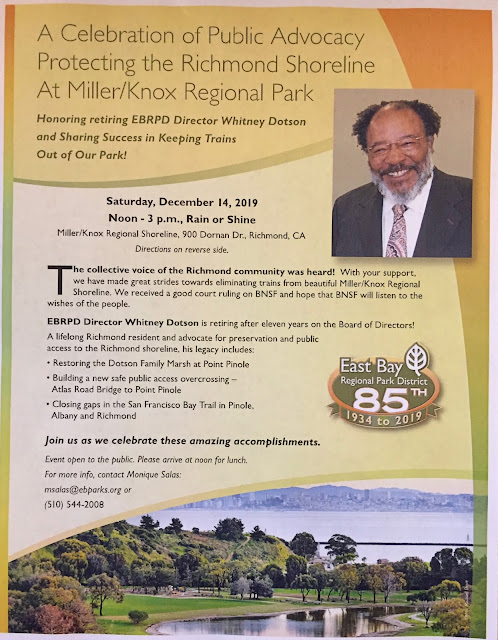 Posted by Michael J. Fitzgerald at 10:47 AM No comments: