Richmond-to-SF ferry to start next fall

RICHMOND - The anticipated start of daily ferry service from Richmond to San Francisco for early 2018 will now be more likely beginning more than a year from now.
"Project dredging is expected to begin in October," Ernest Sanchez, manager of public information and market for San Francisco Bay Ferry said Monday.
"Construction of the land side portion of the terminal is expected to begin in January 2018.
When that construction is done sometime late in the fall, ferry service is expected to begin.
An earlier estimated time frame for beginning service - sometime in spring of 2018 - was discussed by Sanchez at the Dec. 6,  2016 meeting of the Point Richmond Neighborhood Council. 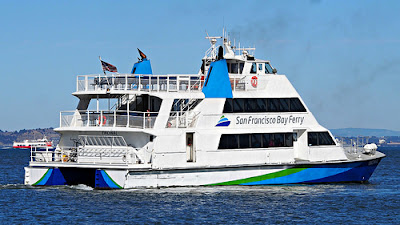 At that time, Sanchez said the ferry service was planning three morning departures and four afternoon trips, leaving and returning to a pier near the Craneway building.
Parking for about 360 vehicles is planned for the Richmond side.
In San Francisco, the ferry will dock at the SF Ferry Building.
"For now, this will be a peak commute service," he said. Initially, there won't be any weekend or midday service."
The 400-passenger ferry that will be used for the SF-to-Richmond run has room for 50 bicycles, will offer food and beverage service, and make the trip from Richmond-to-SF (and back) in about 30 minutes.
The ferry - named Hydrus - is already in service ferrying SF Bay Area customers until it's needed in Richmond.
Posted by Michael J. Fitzgerald at 4:20 PM No comments: