The evening included a potluck dinner, numerous tributes to the rabbi, Israeli folk dancing, singing - and a Havdalah service.

Kertesz is the son of European refugees, grew up in El Cerrito and still lives in the family home there.

He graduated from Reed College in Portland, Oregon and joined a kibbutz in Israel for several years. He and his wife Carla Cassler have a daughter and son.

When the post of rabbi came open in 2006, Kertesz was selected from a large field of more experienced candidates.

"His decades of life experience, work with Jewish organizations, relaxed intelligence and desire to serve this community made him the winning candidate," a Temple Beth Hillel member said.

Posted by Michael J. Fitzgerald at 9:13 AM No comments:

The meeting is open to the public, begins at 7:30 p.m. and will be held in the Point Richmond Community Center on Washington Avenue.

The 270-unit project has been discussed at several PRNC meetings, including a special meeting in mid-March. At that meeting numerous Point residents asked questions about the height of the buildings, traffic impacts and safety concerns about ingress and egress for the project off Seacliff.

Residents also questioned whether rezoning the land from recreational use to residential was the best use of the property.

A link to the March 16 story and photos is here: Bottoms Quarry project concerns.

The PRNC is also expected to hear a presentation by Denee Evans of the City of Richmond about proposals to redo parking and make Washington Avenue and Park Place one-way streets.

The parking presentation will be one of the first items of business. The proposed Bottoms Quarry development is on the agenda at 8:10 p.m.


Posted by Michael J. Fitzgerald at 8:37 AM No comments:

RICHMOND - The Sunday morning bagel brunch May 21 at Temple Beth Hillel will feature a staged reading of the famous play An Enemy of the People by Henrik Ibsen.
The brunch begins at 10:15 a.m. Introductory comments and the reading of the play begin at 10:30 a.m. The play will conclude at 12:30 p.m.
The brunch and play are open the public. A $15 per person donation is suggested. 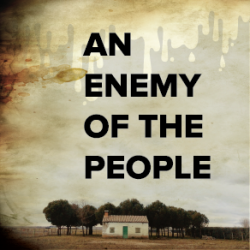 The play will be read by the Actors Ensemble of Berkeley and directed by Bay Area's Michael Cohen, who is also president of Temple Beth Hillel.
The play is an adaption written by Arthur Miller in 1950, an exploration of what can happen to the truth when it stands face to face against the will of the people.
Many critics over the years have called An Enemy of The People the first ecology play.
The protagonist, Dr. Stockmann, is an idealistic Norwegian physician. He discovers that the waters in the popular baths of his hometown are contaminated. As he attempts to warn of an environmental disaster, he is shouted down by the people, worried about their livelihoods.

They eventually label him "an enemy of the people."
The story is filled with historical significance and has many implications for environmental issues we face today.
Temple Beth Hillel is located in the Hilltop area of Richmond. 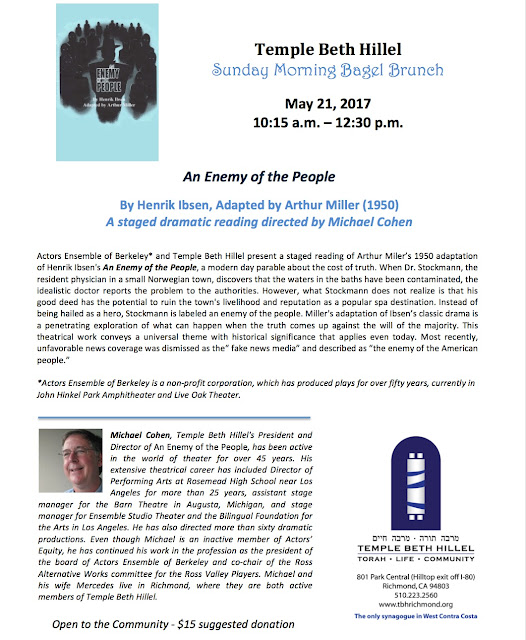 Posted by Michael J. Fitzgerald at 8:02 AM No comments: