City delays consideration of funding proposal for Terminal One until Sept.

EDITOR'S NOTE and Update to story below:
Richmond city officials Monday said the proposals described below will not be considered Tuesday, July 2 - or July 16 - after all.
Instead - at the request of the developer - the issues raised in the story are now expected to be taken up in September.
This story will be updated with links to city documents later this week.

RICHMOND - The Richmond City Council was set to consider a proposal this week to use funds from several city sources - including funds collected from other developers - to help with increased costs at the Terminal One residential project.
But city officials said the discussion and decision has been delayed and will likely take place in September.
The council had received a written request to delay a vote on the proposal. And several Point residents were expected to ask the council at the meeting to delay also, citing a short notice of the item being considered.
The city-collected funds are proposed by the city to help the developer cover increased costs to handle seismic hazards, development of the promised waterfront park and improvements to the Ferry Point Lift Station.
The details of the fund allocations being considered include: 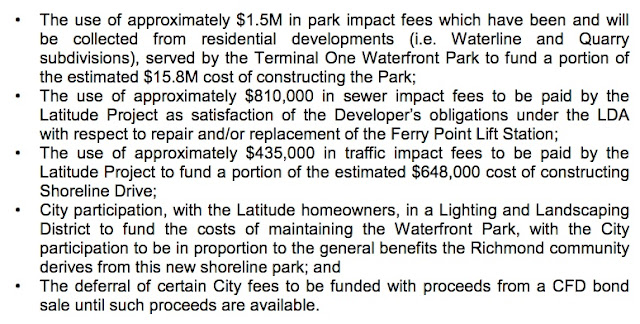 Posted by Michael J. Fitzgerald at 6:33 AM No comments: