RICHMOND - The City of Richmond Design Review Board will be discussing two proposed housing projects in Point Richmond Wednesday night - Terminal One and Bottoms Quarry, also known as the Quarry Residential Project.
The open-to-the-public meeting begins at 6 p.m. in the multi-purpose room of city hall at 440 Civic Center Plaza.
The 316-unit, Terminal One project  on Dornan Drive - which includes condominiums as well as single family homes - will be the subject of a DRB public hearing. 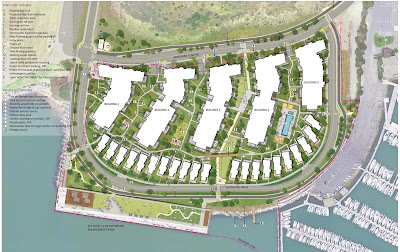 The proposed project was the subject of a lengthy community meeting Nov. 4 at the Richmond Yacht Club at which a attendees expressed concerns about a number of environmental issues.
A number of people also objected to the lack of parking along a public shoreline road which, if approved, will border a public park and pier.

The DRB will also hold a public hearing on the proposed Quarry Residential project off Seacliff Drive.
The 200-unit proposal will require a rezoning from Parks and Recreation to a residential designation, a process that the City of Richmond is running in tandem with consideration of the actual project.
Area residents have repeatedly asked that the developers or the City of Richmond to consider modifications to Seacliff Drive because of unsafe road conditions.
At a city planning commission meeting Thursday, Nov. 16 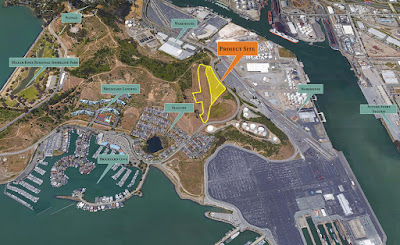 traffic engineer Sam Tabibnia told planners the project will add about 1,400 vehicles to the existing 2,000 that travel daily on Seacliff Drive, most at 42-45 mph through the 25 mph zone.
Much of the resident testimony that night - and at several other meetings about Seacliff traffic problems - centered on the need for a left turn lane into the proposed project.
Support was also voiced for not having any ingress or egress directly off Seacliff. Requiring the project to use an alternative entrance from Canal Boulevard was suggested.
Planning commission chair Marilyn Langlois that evening said she was concerned about considering a general plan amendment change while also reviewing the project, noting that there is property in other parts of the city properly zoned for residential construction with no need for a general plan alteration.
"I am concerned that we are putting these two things together," Langlois said, adding that doing so might put the developers - New West Communities of Las Vegas - at an "unfair advantage" to other potential builders.
Here is a link to the report on the Nov. 16 planning commission meeting: