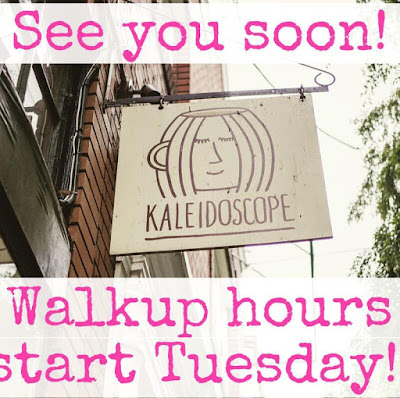 POINT RICHMOND - Kaleidoscope Coffee, 106 Park Place in Point Richmond announced Monday it is open for business starting Tuesday.
The shop will be open for walk-up service Tuesday through Saturday, closed Sunday and Monday.
Tuesday through Friday hours are 8 a.m. to noon and 1 p.m. to 5 p.m.
Saturday the shop is open from 9 a.m. to noon.
"We'll have pastries, all the coffee drinks, and of course, ice cream," owner Cassie says.
She also said Kaleidoscope's popular PBJ sandwiches might be available, too.

Posted by Michael J. Fitzgerald at 2:31 PM No comments:

RICHMOND - A set of even more stringent orders - these using the term quarantine - were issued by the Contra Costa County Health Services today.
The following is a press release about the orders. Below the text of the press release are links to the full orders.

"Contra Costa Issues Mass Isolation and Quarantine Orders for People with COVID-19 and Their Close Contacts Health Officer Dr. Chris Farnitano announced today that the County is issuing a mass order for residents with COVID-19 and their close contacts to isolate and quarantine themselves. The mass order is being issued to help slow COVID-19’s spread, protect vulnerable individuals, and prevent the healthcare system in the County from being overwhelmed. The county’s public health staff no longer have the capacity to individually notify and track everyone with COVID-19 and their close contacts who may have been exposed to the virus.   As of Friday, 307 county residents have tested positive for COVID-19 and five people have died from the virus. Contra Costa County had no local cases at the beginning of March. “We’ve reached a critical point in the COVID-19 crisis here in Contra Costa,” Dr. Farnitano said. “Our resources are stretched extremely thin and business as usual is not an option. We believe this mass order is a creative and effective way of getting the job done to keep the sick isolated from others.” Residents must isolate themselves in their home or another residence if they test positive for COVID-19. They may not leave their home except to receive necessary medical care or during an emergency that requires evacuation.   COVID-positive individuals without symptoms must isolate for 7 days from the date of a positive test. Those with symptoms must isolate at least 7 days have passed since their symptoms started. Initially symptomatic people must also wait at least 72 hours have passed since after symptoms go away. Symptoms of COVID-19 include fever, coughing and shortness of breath. County residents who test positive for COVID-19 will now be required to tell their close contacts that they need to quarantine themselves if they may have been exposed. Close contacts must then remain at home or another residence for 14 days from the last date that they were in contact with the person infected or with COVID-19. People considered “close contacts” are persons who, during the sick individual’s infectious period, live in, or have stayed overnight, at the individual’s residence; are intimate sexual partners of the individual; or provided care to the individual without wearing a mask, gown, and gloves. People can access instructions on how to isolate and quarantine themselves at cchealth.org/coronavirus. "
=============

ORINDA - Contra Costa County Health Services said today that 27 people who live or work at a skilled nursing facility in Orinda have tested positive for COVID-19.
No deaths have been reported in connection with the outbreak at the Orinda Care Center which has 45 residents.
" Public health has prepared for the possibility of outbreaks happening in skilled nursing facilities and other congregate care settings," Contra Costa Public Health Director Dan Peddycord said. "We are working closely with the facilities now to protect residents and staff."
CCHS began investigating after two staff members sought medical care. Test results were positive for the workers and for two patients at the facility Wednesday.
By Thursday all patients and staff had been tested with 24 residents testing positive so far. Two are receiving care at local hospitals.
The county is also testing two other senior care facilities in the county.
"The situation is very serious and we are deeply concerned about residents of our senior care facilities," Dr. Chris Farnitano, county health officer said. "That is why we need everyone to follow the stay-at-home order, social-distance guidance and other measures in recent health orders."
Health officials also issued a "strong recommendation" that residents wear masks or other protective face covering when going to the grocery store or when engaged in other essential activities.
There have been five confirmed deaths and more than 300 confirmed cases of COVID-19 infection in Contra Costa County, health officials reported.
Posted by Michael J. Fitzgerald at 3:40 PM No comments:

RICHMOND - The Craneway Pavilion on South Harbour Way is in the process of being converted into a 250-bed hospital/medical station to treat COVID-19 patients.
Trucks loaded with beds and equipment began arriving and unloading Thursday morning. By noon public access to the Craneway - including the walkway around the building - was gated and closed.
At present, the facility is planned to be used only for COVID-19 patients who do not need to be placed in a hospital Intensive Care Unit. The beds and supplies were brought in by the National Guard.
Officials said the facility is expected to be up and running by the third week of April, the time health officials expect to see a peak in the number of COVID-19 patients in the Bay Area.
"This is one more step to be better prepared for the anticipated COVID-19 surge," Candace Andersen, chair of the Contra Costa County Board of Supervisors said.
The medical facility will only be used if local hospitals cannot handle the expected surge.
The site will be secured and no visitors will be allowed.
The county is also establishing other alternative care sites include using hotels for homeless county residents, officials said.
The parking lot across the street - previously used for ferry patron parking and public access - is expected to be closed to the public also to be reserved for medical and hospital support personnel.

Posted by Michael J. Fitzgerald at 9:56 AM No comments:

POINT RICHMOND - A reception for internationally known artist and yachtsman - and Point Richmond resident - Jim Dewitt will be held Saturday at Kaleidoscope Coffee.
The event is open to the public and runs from 4 to 6 p.m.
His artwork will remain on display at Kaleidoscope until April 30..
Among his many awards was being named America's Cup Artist-in-Residence in 2013.
Dewitt is AOPR's oldest member, having turned 90 in February and his artwork spans decades. But he hasn't slowed down and says he is still happiest with a paintbrush in his hand, immersed in the creative process.
More information about Jim Dewitt's art is available here: JIM DEWITT. 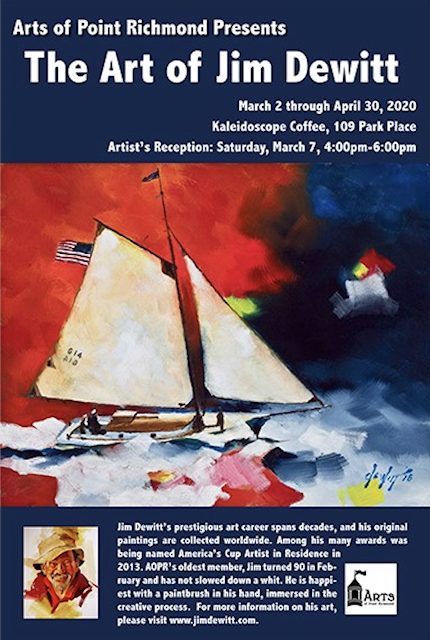 Posted by Michael J. Fitzgerald at 12:43 PM No comments:

HILLTOP - Temple Beth Hillel will host an open-to-the public Purim Carnival and Raffle Sunday, March 8 from noon to 2 p.m.
The carnival will be held at the Temple, 801 Park Central in Richmond.
Organizers encourage attendees to wear costumes and masks - and bring noisemakers.
Along with a reading of the Megillah - the biblical story of Esther - and singing Purim songs, there will be activities, crafts, games and prizes for children.
Home-baked goods and lunch will be available for sale.
For more information, contact the Temple at 510-223-2560. 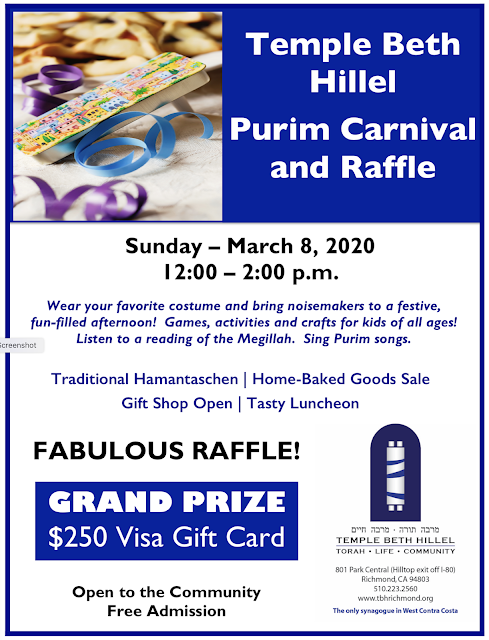 Posted by Michael J. Fitzgerald at 12:29 PM No comments:

PRNC voices concerns about pollution at proposed Terminal One development

POINT RICHMOND - The Point Richmond Neighborhood Council this week voiced serious concerns about pollution - and likely "inadequate" remediation efforts - at the proposed Terminal One residential project adjacent to Miller-Knox Regional Park and the Richmond Yacht Club.
In a letter to the Richmond City Council, PRNC President Peter Thelin outlined a series of PRNC member concerns prompted by a presentation earlier in the month by Brian Lewis of the Brickyard Cove Alliance for Responsible Development (BCARD).
"We are concerned about potential discharges to the Bay and adjacent property; about protecting eel grass used by herring to spawn; and most particularly, about the safety to residents and public using this land in the future," Thelin wrote on behalf of the entire PRNC.
"We have only one remaining chance to clean up this property correctly," he noted.
Thelin's letter came in the wake of a vote by the PRNC Dec. 3 to support the technical recommendations of the consultants to BCARD who have been studying the polluted site.
Many of the recommendations, comments and findings of those consultants were outlined by Lewis at the meeting including concerns that Trichloroethylene (TCE) will remain at the site.
"These findings strongly indicated the Remedial Design is inadequate to protect the Bay or adjacent RYC property," Thelin's letter to the council states.
The Terminal One site is proposed by the Laconia Corporation of Walnut Creek to construct a 316-unit residential development on the former industrial site. It would include a combination of buildings including multi-story condominiums and single family bayside homes.
A public waterfront park is also part of the project, though current plans show no public parking along the shoreline.
The City of Richmond is also weighing whether to dip into city funds to help with increased costs of the Terminal One project.
The funds would be used to help cover developer costs for handling seismic hazards, improvements to the Ferry Point Lift Station and development of the promised park.
Last summer the proposed allocation of city funds included: 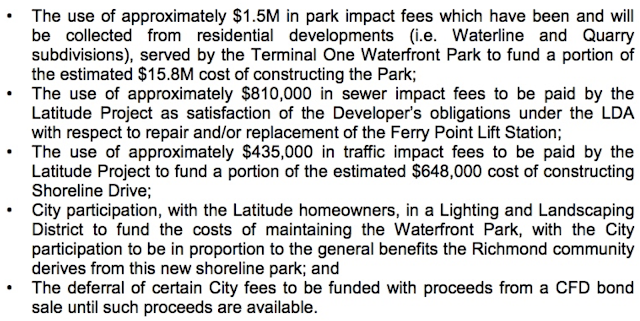