POINT RICHMOND - Two different companies will be filming in The Point Monday and Tuesday impacting traffic and parking.
An earlier story about the filming was published Thursday. "PRNC votes to support filming"
Today the Richmond Police Department released the statement below as well as diagrams of when streets will be closed off and how parking will be affected.
The RPD says that all businesses will remain open. But Tuesday Kaleidoscope Coffee will be closed because the film crew will be using the facility to film. It will reopen Wednesday. 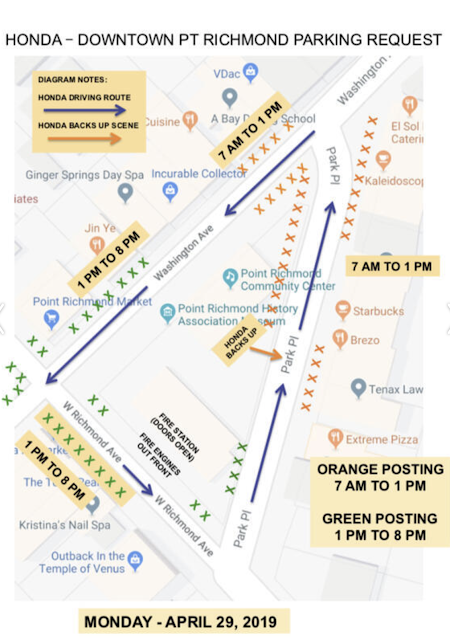 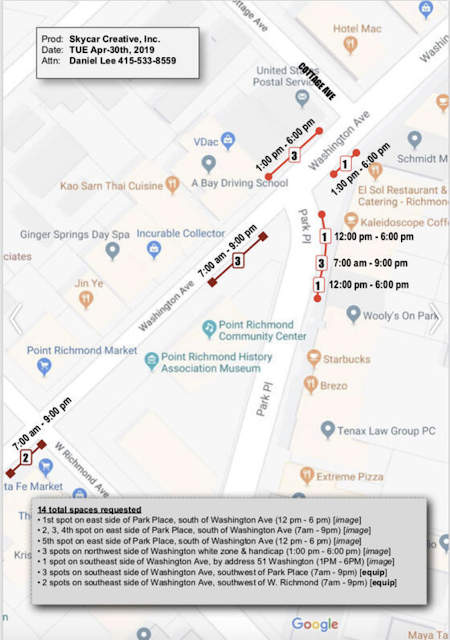 Posted by Michael J. Fitzgerald at 9:00 AM No comments:

POINT RICHMOND - The Point Richmond Neighborhood Council gave a nod of approval Wednesday night to two film projects planned for Monday and Tuesday that will impact traffic flow in the business district.
Both contributed $1,000 to the PRNC for cleanup and restoration work in The Point, including spiffing up the statue near the Community Center. The donations were in addition to fees paid to the City of Richmond to obtain city filming permits.
The project with the likely much-lighter traffic impact is being done by Skycar Creative, a Point Richmond Company.
Jane Selle Morgan of Skycar told the PRNC that her company was filming a software commercial Tuesday. When completed the film would be seen on the web only.
"We are not going to shut down traffic completely, just very intermittently off Park Place," Morgan said. "And a little bit on Washington."
A bigger community impact will be that Skycar will be filming in Kaleidoscope Coffee all day, necessitating closing the popular coffee shop to the public.
But Kaleidoscope owner Cassie Cushing said Wednesday night that as a show of gratitude to the community and Kaleidoscope's many loyal customers her coffee shop will be offering a 30 percent discount when it reopens Wednesday May 1, the day after the filming.
The Honda automotive commercial filming Monday will cause traffic interruptions and parking restrictions from 7 a.m. to 8 p.m. The commercial is being shot to be shown in Northern California only.
A description of the Honda shooting schedule is below. A detailed diagram - indicative of when and where shooting and parking restrictions will be happening - was handed out to the public by the PRNC at the meeting but is not available for publication here.
Richmond Police are expected to be on scene for both film projects. 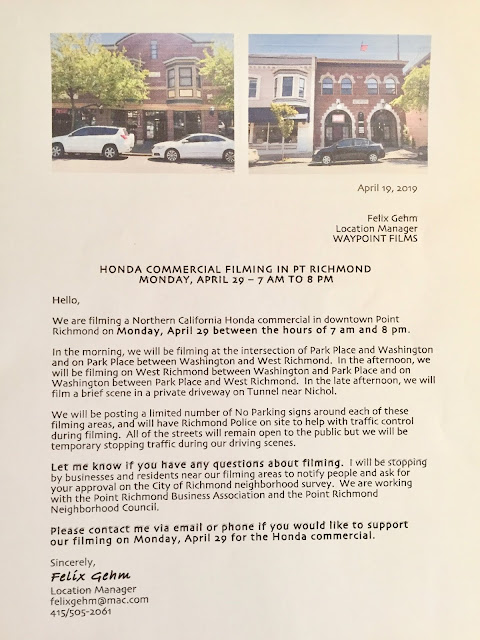 Posted by Michael J. Fitzgerald at 9:21 PM No comments:

POINT RICHMOND - The Point Richmond Neighborhood Council will hear reports - and likely discuss - two upcoming film shoots in The Point.
The meeting begins at 7:30 p.m. at the Point Richmond Community Center and is open to the public. The full agenda is printed below.
The film discussions are listed on the agenda to begin at about 7:45 p.m.
The first filming is Monday, April 29 - a commercial shoot between 7 a.m. at 8 p.m. for Honda.
The morning filming will be around the business triangle. A descriptive flyer about exactly where the shooting will be going on and other details about parking is below.
The second filming is Tuesday, April 30 by Medallia Commercial. The agenda lists Andrea Bloom of Skycar Creative as the contact person. Further details about how much that filming might impact The Point are expected to be discussed at the meeting.
Parking and traffic flow are expected to be impacted by the Monday event with "no parking" signs posted close to the filming. Richmond Police will be on scene to assist, according to Felix Gehm of Waypoint Films, location manager for the filming.
"All streets will remain open to the public but we will be temporary stopping traffic during our driving scenes," he said.
Pedestrian traffic on sidewalks is not expected to be impacted, he said. 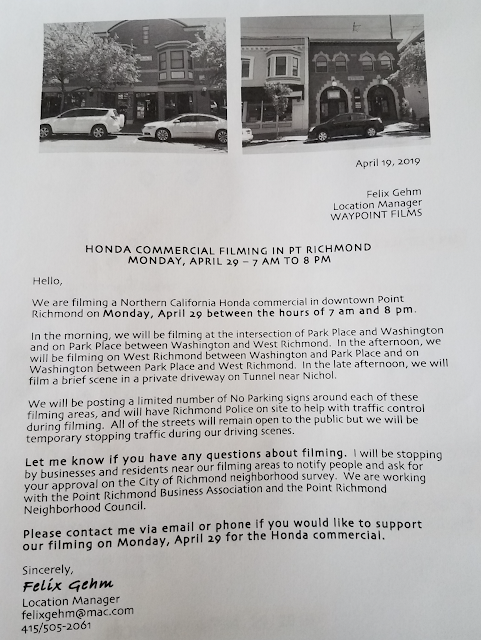 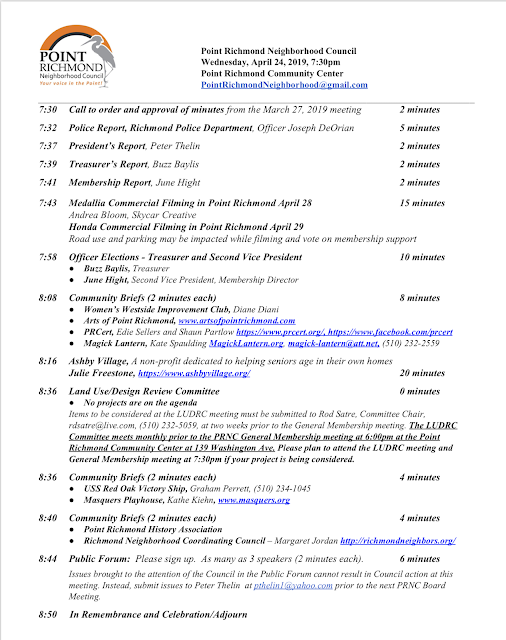 Posted by Michael J. Fitzgerald at 12:20 PM No comments:

RICHMOND - The Pacific Sail & Power Boat Show continues today and Sunday at the Craneway Pavilion (1440 Harbour Way South) and Marina Bay Yacht Harbor (1340 Marina Way South).
The show celebrates sailing, boating and all types of marine sporting lifestyle.
In the Craneway, vendors ranging from diesel engines to autopilots to clothing to publications to solar panels have items on display and for sale. 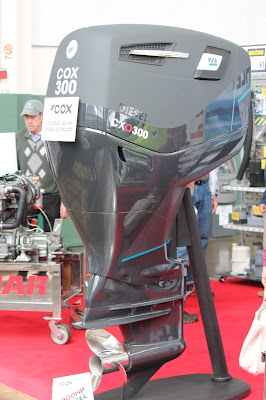 Seminars on all manner of concern to boaters - and those wishing to become boaters - run each day.
At nearby Marina Bay Yacht Harbor, new power and sailboats are on display also.
"We are thrilled to have so many exhibitors, new boats, products and interactive events to involve the community this year," Katie Kelly, Sail America's Association Manager said.
"Attendees will find the latest boat communications technology, boats, and solar panels."
In addition, there are a number of younger participants and activities this year including special events put on by Groundwork Richmond's environmentalists and the West Contra County Sea Scouts. Groundwork Richmond will be teaching kayaking. The West Contra County Sea Scouts will be instructing in rope knotting.
Today free standup-paddle board lessons are being offered by 510 Waterline until 1 p.m.
Also today, at 6 p.m. Cruising Outpost will hold a party and raffle to raise funds for Call of the Sea, an organization that works with the Educational Tall Ships Foundation Project in Sausalito.
For more information about the boat show scheduling and tickets, follow this link: Pacific Sail & Power. 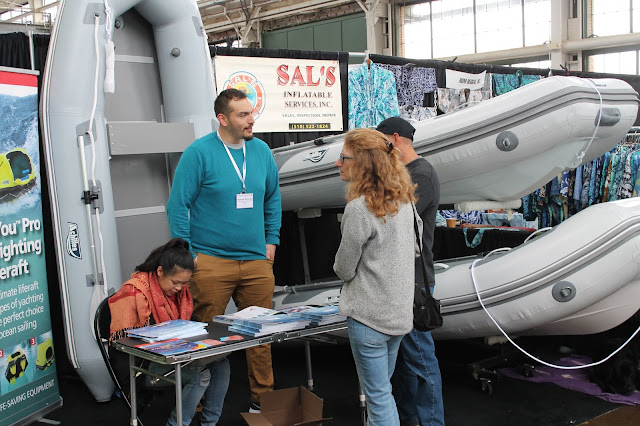 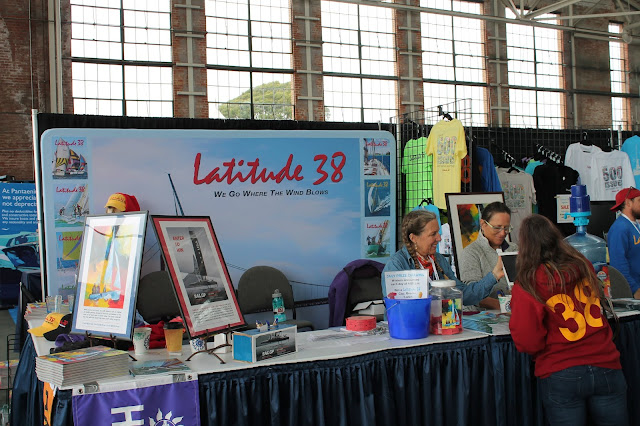 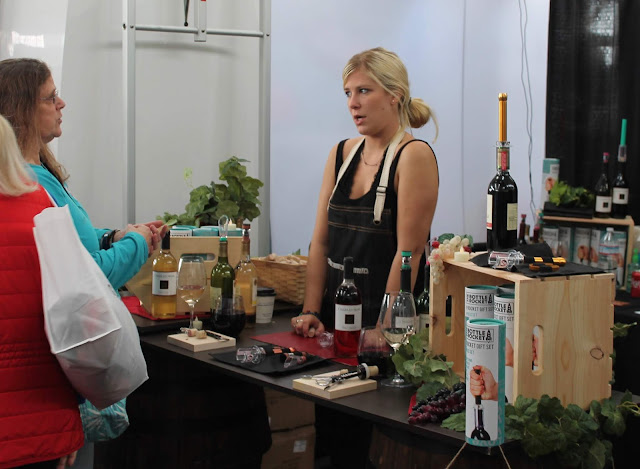 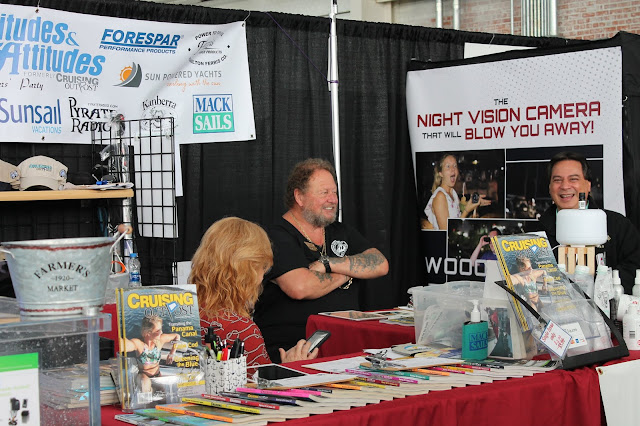 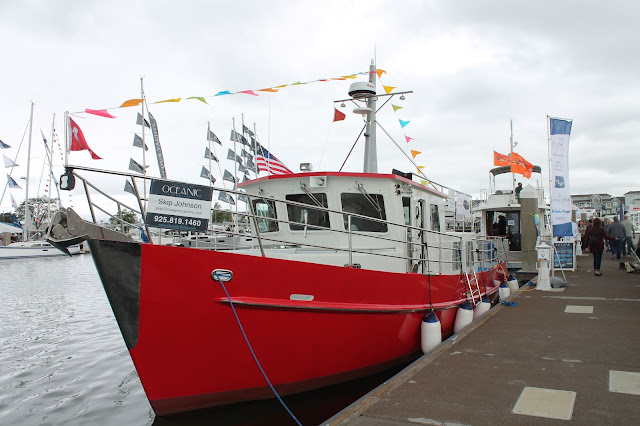 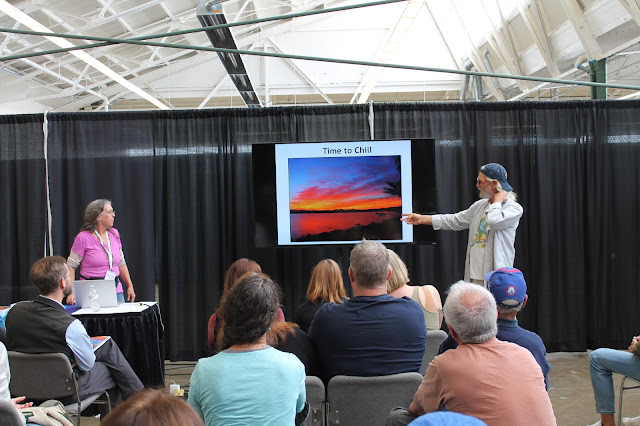 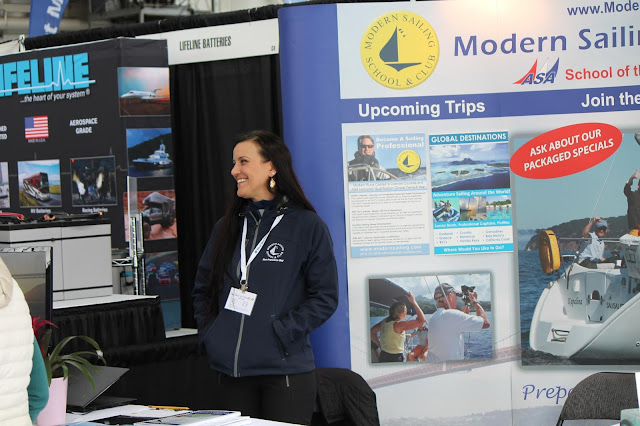 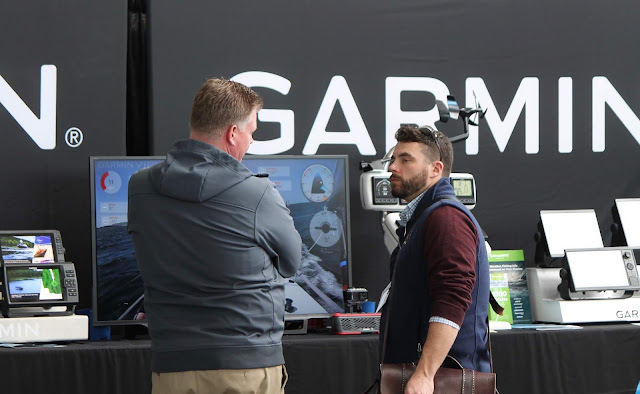 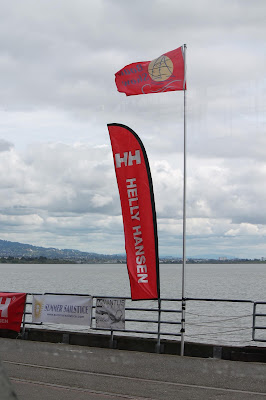 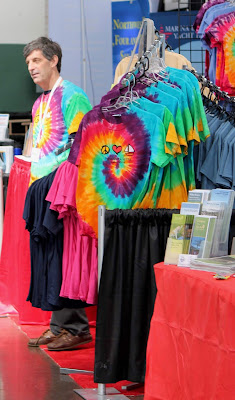 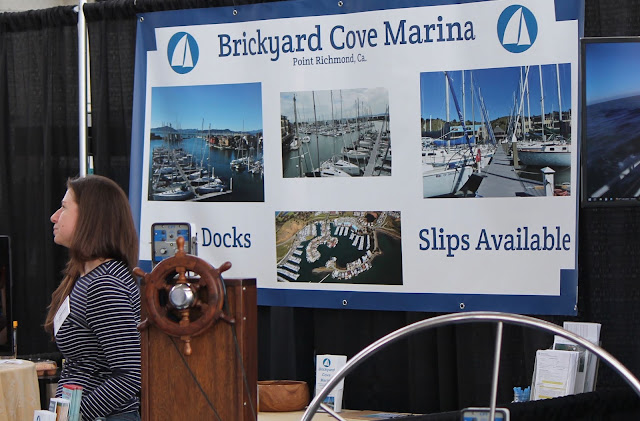 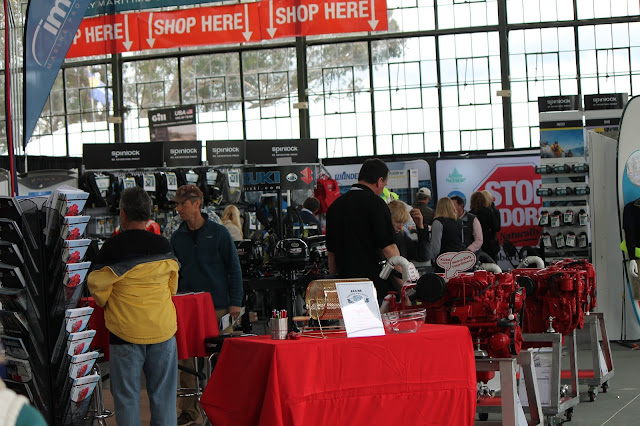 Posted by Michael J. Fitzgerald at 10:38 AM No comments:

POINT RICHMOND - A Point Richmond resident this morning reported on Nextdoor that it appeared the abandoned Burlington Northern-Santa Fe railroad tracks in Miller-Knox Park were being surveyed.
"I can see tracks being inspected," she said. "Looks like surveyors and railroad officials."
By noon, any inspection activity was apparently over. There were no surveyors or other BNSF staff on site.
The tracks show clear orange paint markings beginning 100 yards north of the southern end of the lagoon. The marks are on the tracks going north towards the tunnel.
BNSF officials have been contacted for comment. 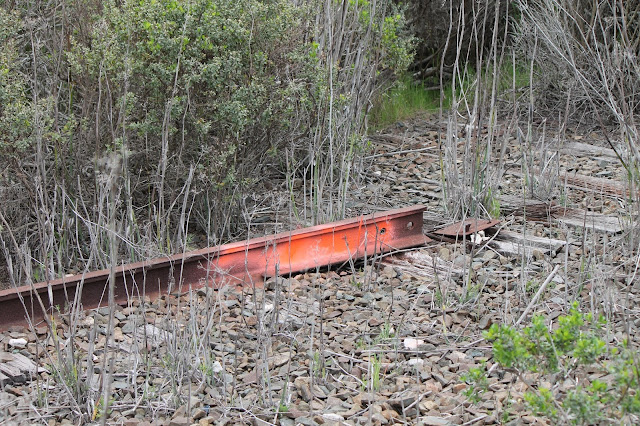 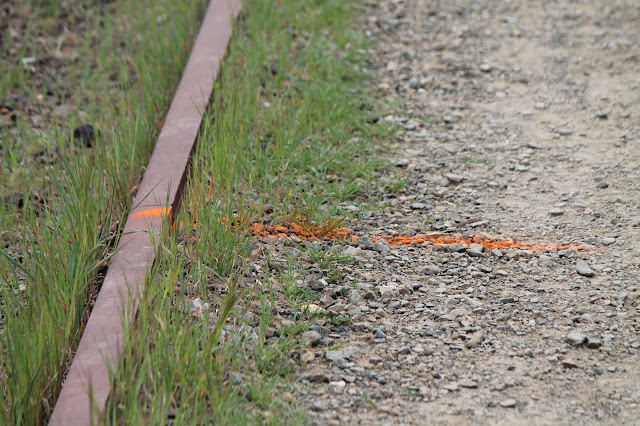 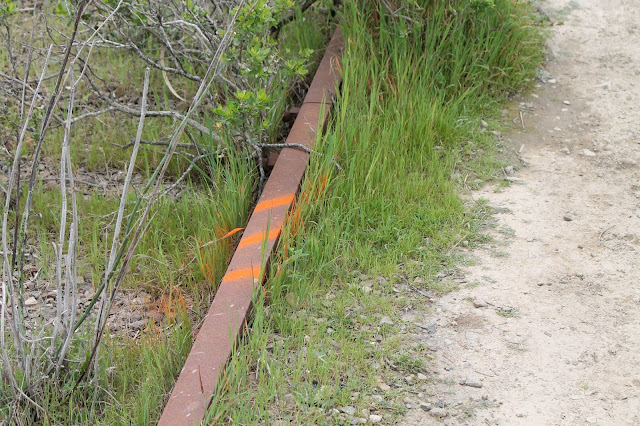 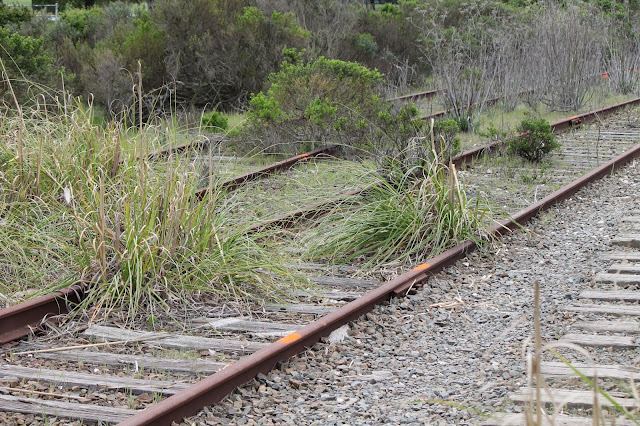 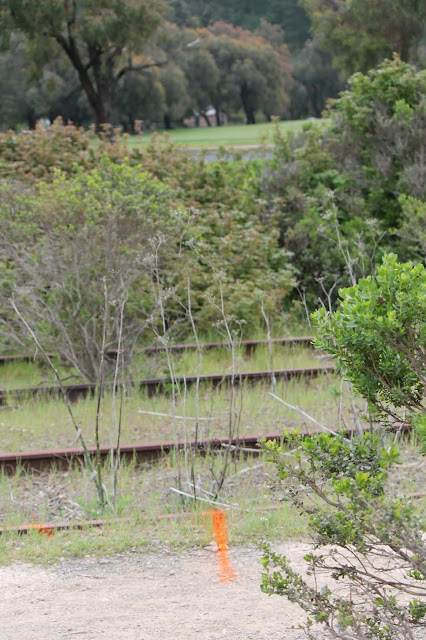 Posted by Michael J. Fitzgerald at 1:05 PM No comments: