POINT RICHMOND - The Point Richmond Neighborhood Council will hear an update and report about Burlington Northern Santa Fe Railroad's plans to reactivate and use railroad tracks in Miller Knox Park.
The report will be made by Carol Johnson of the East Bay Regional Park District. The district filed a lawsuit in October of 2017 to resolve the issue.
Earlier this year, EBRPD offered this statement to clarify the situation:
“The property containing the remnant rail road tracks was purchased from Burlington Northern Santa Fe in 1991," EBRPD officials wrote.
"As part of the purchases, Burlington Northern Santa Fe was granted an easement back for the limited purpose of continuing to serve two adjacent industrial properties, the Bray Oil property and the Terminal One (formerly Petromark) property, only for so long as those industrial sites remained in operation. The Bray Oil property was purchased by the Park District in 1999 and designated open space. The Terminal One property stopped all industrial activity in the 1990s and is now owned by the City of Richmond and is designated for residential uses.”
The PRNC meeting begins at 7:15 p.m. at the Point Richmond Community Center. Johnson's reported is slated to begin at about 7:20 p.m.
The PRNC meeting is starting 15 minutes earlier than normal to accommodate an unusually long agenda. 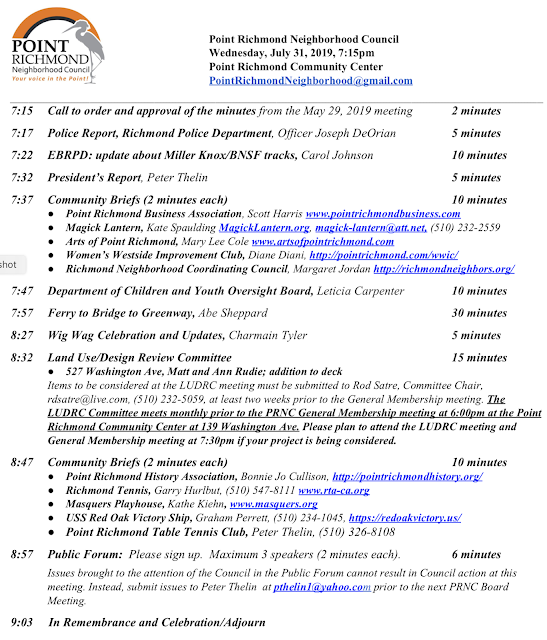 Posted by Michael J. Fitzgerald at 12:08 PM No comments: