Comments on Terminal One pollution cleanup plan due Wednesday, Oct. 3

POINT RICHMOND - Public comments about the latest proposal to clean up the remaining pollutants at the Terminal One site on Dornan Drive are due by Wednesday, Oct. 3.
They should be sent to the San Francisco Regional Water Quality Control Board, 1515 Clay St., Suite 1400 Oakland, CA or directly via email to Jeff White of the water board: JEFF WHITE.
This latest remedial action plan was the subject of a public hearing last week in Richmond. The proposal - which needs to be approved by the water board - is a prelude to actual removal of suspected toxic materials. If the cleanup plan is approved in its current form (or modified) it would then pave the wave for the eventual construction a proposed 316-unit residential project on the San Francisco Bay site. The developer is the Laconia Corporation.
At the public hearing, representatives of the Brickyard Cove Alliance for Responsible Development raised issues and pointed out perceived shortcomings with the cleanup plan.
This week, BCARD followed up with a letter to the water board, asking that the letter - and 11 prior sets of comments already submitted on the project - be taken into consideration by the state agency before it makes it a determination about whether to allow Laconia to move ahead with cleaning the pollutants from the former industrial site.
The contaminants at the site include chlorinated solvents, petroleum and hydrocarbons along with polycyclic aromatic hydrocarbons. The contamination is a legacy of the property's nearly 100 years  as a shipping and industrial site. 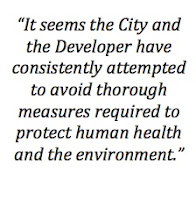 "In the last fifteen years, the city has only sampled groundwater site-wide twice while the science regarding what are 'safe" toxic levels has become more stringent," the group wrote.
"The City's own data shows that discharges above the aquatic levels are being leaked into the Bay. It seems the City and the Developer have consistently attempted to avoid thorough measures required to protect human health and the environment."
At the public hearing, BCARD representatives asked that the developer increase the size and scope of a proposed "slurry wall" to keep any remaining pollutants in the soil (underneath the homes, proposed park and development grounds) from leaking into the Bay. They restated that request in their most recent letter to the water board.
The remedial action plan proposed by the City of Richmond and Laconia includes:
• Podium construction of residential structures;• Collection, on-Site treatment, and off-Site discharge of most stormwater runoff;• Raising Site grades and import of clean fill;• Capping the Site with buildings, roads, pathways, and other hardscape;• Slurry wall construction to mitigate potential petroleum discharges to San Francisco Bay;• Landscaping as either common area maintained by the homeowner’s association or public openspace/parkland maintained by the City, in areas not covered with permanent, hardscapedfacilities; and• Institutional controls prohibiting residents and visitors from excavating on the Site.

Posted by Michael J. Fitzgerald at 2:06 PM No comments: