POINT RICHMOND - The Milo Foundation began taking animals back to its Willits-area Sanctuary Tuesday after having to evacuate the facility early last week because of wildfires.
"We have good news," John Fonseca, Milo Outreach Coordinator said.
"Staff have started taking most of the animals back to the Sanctuary. And some of the Sanctuary animals were even adopted while they were here."

The Milo staff had to move the animals the day the wildfires began burning across Northern California. Some animals went to local shelters near Willits, well away from fire danger.
But many were brought to the Point Richmond facility.
"People came out of the woodwork to foster, to help in so many ways," Fonseca said. "We received monetary donations,  donations of food and other items.        "We were overrun with help, and it was amazing."
The shelter had to make space for the incoming animals, many of which - because of behavioral quirks - are often not adoptable.
But Fonseca said a number of the Sanctuary animals found homes in this area.

The evacuation of the Willits facility came just as the Point Richmond Milo facility was digging out from under dealing with animal refugees from the hurricanes that battered the Gulf Coast.
But things are slowly going back to normal now, Fonseca said. Even so, the facility has a continuing need for food and other donations.
For information about the Milo Foundation - and to donate - follow this link: MILO FOUNDATION. 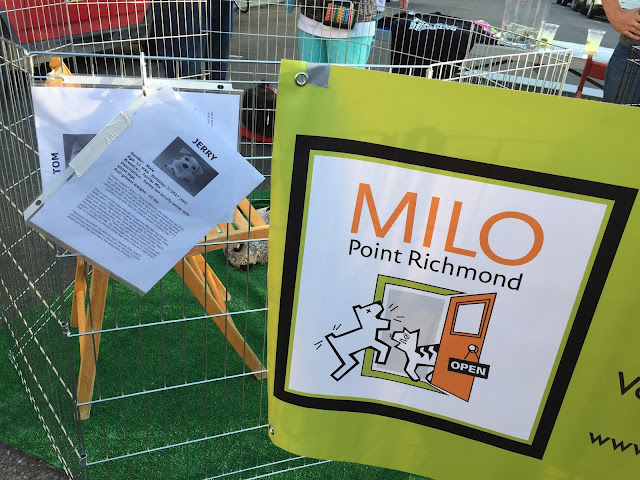 Posted by Michael J. Fitzgerald at 10:01 AM No comments: