RICHMOND - The vehicle wrecking yard that was the site of a big early morning fire Dec. 16 has more hazardous waste violations than previously thought.
Contra Costa County officials announced Friday that Deal Auto Wrecking yard on West Gertrude Avenue has 30 days to clear up the problems, the East Bay Times reported Friday night.
In the December fire as many as 200 vehicles burned putting up a huge plume of toxic black smoke.
The fire prompted officials to order a 'shelter in place' for people living near the yard.


To read the full story in the Times, follow this link: More violations at wrecking yard. 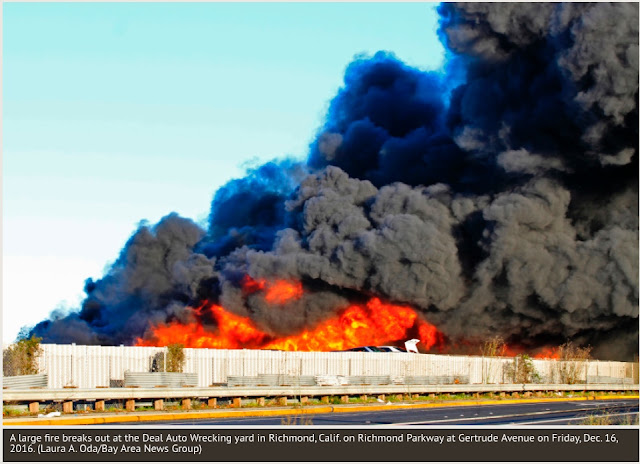 Posted by Michael J. Fitzgerald at 9:53 PM No comments:

The event is "Breakfast with Bobby Seale" part of the celebration of Black History Month, the East Bay Times reported today. It is being hosted by the non-profit community group For Richmond.

The 9 a.m. to 11 a.m. event is open to the public, but an online RSVP is required. Here is RSVP link: Breakfast with Bobby Seale.