A citizens' group has asked the Richmond City Council to vote "no" tonight on a resolution giving additional funds for the development of the Terminal One project.
The city council meeting dealing with giving additional funds for Terminal One begins at 6:30 p.m. in the city council chambers at 440 Civic Center Plaza.
The meeting is open to the public.
The item on the agenda is H-1 and reads:

A letter from the Brickyard Cove Alliance for Responsible Development (BCARD) says giving monies to developer Laconia as described in the resolution is not a correct use of the funds.

The letter also points out that most of the $8 million received by the city to clean up the chemical pollution and toxic wastes on the former industrial site has been spent.


"This is a bait and switch tactic being used by the developer. We ask the City Council to vote No on this resolution and future attempts by the developer to shift the cost to the City or use additional park or sewer funds for improvements the developer committed to pay."

The future shifting of costs referred to by BCARD was a proposal earlier this summer for the city to use public monies from several city sources - including funds collected from other developers - to help with increased developer costs at Terminal One - now being referred to as the Latitude Project at Terminal One.

That proposal - expected to be taken up in the future - includes: 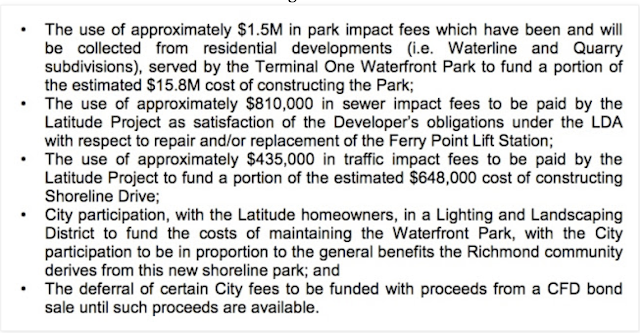 Posted by Michael J. Fitzgerald at 10:58 AM No comments: