Chevron eyed as one source of foul smells

POINT RICHMOND - The East Bay Times reported late Friday that officials are "zeroing in" on the Chevron Refinery in Richmond as the likely source of at least some of the noxious odors  experienced in Richmond, Point Richmond and across the Bay in San Francisco in late December.


By Karina Ioffee
RICHMOND — Air district officials are zeroing in on the Chevron refinery in Richmond as the source of foul odors detected in San Francisco and Richmond, with fines against the company likely, according to one member of the district’s board of directors.
The refinery experienced two flaring incidents, one on Dec. 27, shortly before midnight, and the other Dec. 28 around 8:45 p.m., according to a report issued by the refinery for Contra Costa County health officials. One of the flaring incidents was not reported for at least 12 hours, violating state law, according to John Gioia, a Contra Costa County supervisor and member of the Bay Area Air Quality Management District board.
Gioia said in a phone interview Friday that air district officials now believe that the flaring incidents were responsible for the odors that were reported in San Francisco and Richmond.
For the rest of the story, click HERE. 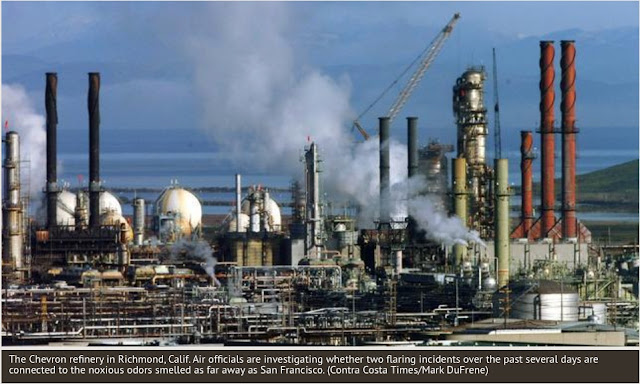 Posted by Michael J. Fitzgerald at 8:38 AM No comments: